Master of the Art and Craft 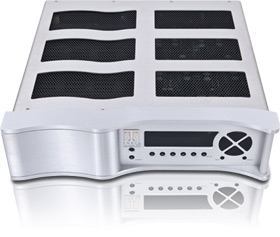 The Generation VIII Series 3 delivers the most accurate, defined, natural sound that digital technology offers. It represents over twenty years of Theta Digital’s tireless research and development in D / A converter design, and achieves the highest levels of sonic performance possible in a product category that Theta pioneered: the external DAC.

Here are some highlights:

In 1986, Theta Digital was born, its original product the DS Pre. This was the first outboard digital to analog converter offered to the public. This DSP-based unit was an instant success due to its dramatic superiority over the simple D to A sections of all CD players.

The wealth of revealed musical information previously unknown to digital sound reproduction was the most obvious and remarkable aspect to the original Theta Digital product.

One advantage of the DS Pre was its function as a preamplifier. By including some basic switching and a superb analogue volume control, the DS Pre offered a simplified system. This streamlining dispensed with all the degradation inherent in multiple gain stages and connections. For all-digital systems, nothing sounded as good as the DS Pre, since it replaced the preamp completely.

For those who didn’t want to replace their preamplifiers, the DS Pro was essentially the same thing as the DS Pre, minus volume control.

The Generation VIII Series 3 was long in the planning stage. This delay was partly due to the moving target of format change and to the awaited development of a new chip set that lets the G8S3 play SACD and DVD Audio in their native formats. Meanwhile, Theta pioneered important new technologies, like Jitter Jail, and developed a new kind of “open architecture” product, the Casablanca platform.

We realized that the improvements we had piled up were so profound as to constitute a complete revolution: hence, Generation VIII Series 3.

The Generation VIII Series 3 has all of the sonic benefits of an upsampling processor, and none of the drawbacks.

Upsampling, a term from the professional recording industry, refers to a box added between a digital source and a converter. The upsampler allows what is referred to as “noise shaping,” and adjustments of other parameters in a digital signal. Typically it provides 2x oversampling to the signal in order to have the headroom to do the noise shaping.

The interesting thing about these outboard boxes is that users can listen to the differences it makes when you adjust, for instance the sample rate conversion from 44.1 kHz to 48 kHz. You could call it the digital equivalent of an analog equalizer – both good and bad. Bad systems can benefit from them, but the more accurate the system is, the more likely the box is to introduce degradation.

An upsampling digital signal processor can only improve sound in one way, and that is by oversampling. What oversampling does is to resample the signal so many times that digital artifacts are forced far away from the audible spectrum as the calculations are taking place to process the signal into analog. Theta’s sophisticated processes do this in a number of steps to get the finest results possible.

We go to great lengths to attain levels of fidelity, resolution, and freedom from noise and distortion far beyond what is possible with less heroic designs, by using fully balanced differential circuit design, all the way through.

What does that mean? In essence, each channel is really two mirror imaged signal paths.

In the Generation VIII Series 3, digital signals are “balanced” before they are processed: the mathematical signal is cloned, and the phase-inverted duplicate processed through a path identical to its twin. The two signals stay separate until they are united at the end of the signal path, canceling out noise. In a full Theta Digital system, the signal stays balanced and separate up until it goes to your speakers, as all of our products utilize this balanced differential technique.

Discontinuities arise in the course of processing, but do not survive in a balanced / differential circuit. Anything not exactly “mirror imaged” between the two signals is eliminated (called “common mode rejection.”) This preserves the integrity of the signal in a way that no other procedure can.

This no-compromise technique is rarely used, however, because it requires almost twice as many devices as conventional processing.

Note that some digital components from other manufacturers have XLR connectors on their back panels, but are not truly balanced circuit designs. The connector on the outside is no indication that there are even partially balanced circuits on the inside!

Theta’s proprietary Jitter Jail technology virtually eliminates jitter. The circuitry stores all digital audio in a buffer where the signal aligns perfectly and then reclocks it to the DACs using a high-precision crystal oscillator and DSP algorithm. The resulting rock-stable digital audio suffers none of the problems associated with ordinary, jitter-prone processors.

What is Jitter? Jitter is one of the major factors in the degradation of digital signals. As data streams make their way through circuits, connections and components, they have a tendency to become temporally misaligned. This is an inherent vulnerability. The errors tend to be cumulative, and as the misalignment worsens, it can become impossible to correct.

These timing errors, which are called jitter, translate into harmonic distortions to the music. Once incorporated into a musical signal, these errors are inextricably part of what you hear, and since they are mathematical artifacts unrelated to music, the sound can be quite stressful to endure. Even when jitter is reasonably low, rather than providing you with a headache, these residual errors can cloud the music and dirty up the sound, taking away the spirit of the music.

Theta Digital uses many methods to minimize jitter at points where the signal is particularly vulnerable. All digital signals are reclocked as they come in to any of Theta’s D / A processors. Theta deals in other ways with jitter problems originating in transports. Maintaining signal integrity all along the digital chain is the goal.

“Jitter Jail” technology, which we introduced in 1998, was a revolutionary new tool developed as an even more effective technology than reclocking the signal “on the fly.” A custom-manufactured low-jitter crystal oscillator at its heart, Jitter Jail acts as a buffer, actually storing the digital signal long enough to reclock it much more perfectly than we can do as it is streaming by.

The circuit’s master clock realigns data, correcting raw data as it comes from the disc.

This high-precision buffer becomes your source, rather than the CD, which has jitter problems of its own. CDs are not physically perfect, and the recording and editing leading up to the CD has its own accumulated jitter. The pits are unevenly aligned, there are deformities in the material of the substrate, and the clear plastic is not perfectly clear. By reclocking the data from your CDs you can actually recreate a truer representation of the music, as it was created, than the raw data coming direct from the CD.

The Generation VIII Series 3 is remarkable in its ability to recreate the tone of acoustic instruments, the placement and size of instruments within the sound stage, and the darkness between the players.

High frequencies are delicately reproduced, as silken as the recording offers. The bass reproduction is jaw-dropping; authoritative all the way down, never ponderous. The warmth of the string bass is right on. Electric bass has speed and power.

Resolution on voices is fine-grained: big choral works resolve individual singers, where other processors tend to sound mushy. The Generation VIII Series 3 has none of the icy quality that even some other very expensive upsamplers impart to massed voices.

Jazz recordings intimate the smoky club the music was recorded in. Each note sings to you, through the haze of time – but not through a veil of electronics.

Compared with Theta’s earlier models and with other fine converters now available, the Generation VIII Series 3 offers a new level of musicality and believability.

The Class A analog stage is ultra-fast and accurate. Both analog and digital signal paths are truly balanced, with fully duplicated, differential circuits. Because of Theta’s innovative balanced-to-single-ended summing technology, the Generation VIII Series 3 exhibits many of the same advantages of balanced operation even when used in single-ended mode.

An RS-232 port allows control of the Generation VIII with specialized control systems from Crestron and AMX, as well as access for future software upgrades. One or more G8S3 units can also be slaved to the Theta’s Casablanca III Music and Cinema controllers for ultimate quality home theater installations.

In keeping with Theta Digital tradition, there is an upgrade path for all previous Gen series units, to enjoy the performance, features and aesthetics of the Generation VIII Series 3. See your authorized Theta Digital dealer or international rep for more details.

All DSP processing is 24bit with 56 bit accumulator.

RS232
Complete ability to control and read status of every operational parameter of unit.

Remote Trigger
One 3.5mm mono phone jack: +12VDC triggered (Can be set to Pulse or Continuous DC), pulse time variable from 50 to 250 mSec. Trigger jack can be set as an input (receiver) or output (transmitter). 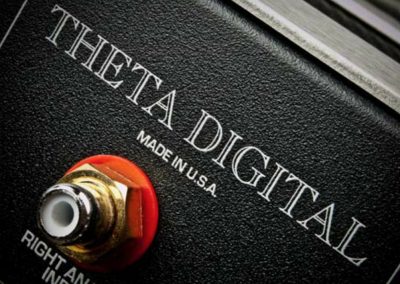 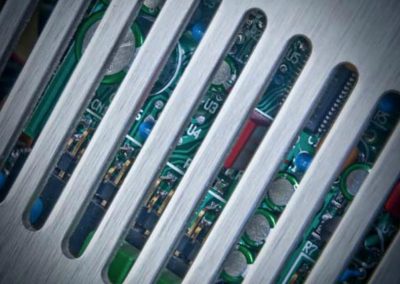 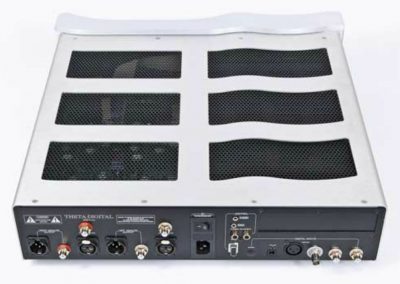 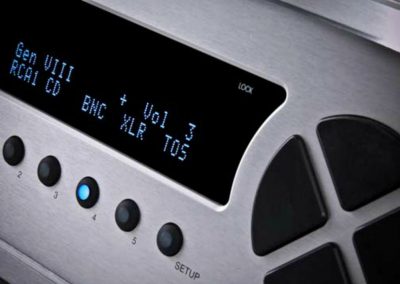 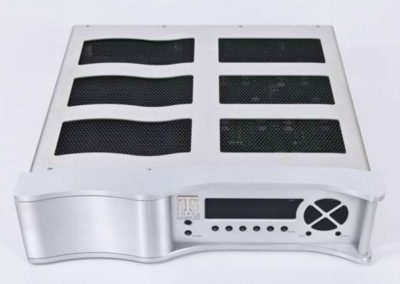 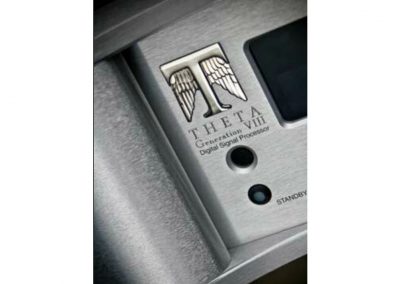